Briefly discuss about the main objectives of Air Traffic Services?
This information is supported by (ivao.aero,2014) says the objectives of the air traffic services shall be to:

Explain how these objectives affect the aircraft movements and ground movements.
This data is supported by (faa.gov,2014) says Ground controllers must exchange information as necessary for the safe and efficient use of airport runways and movement areas. This may be accomplished via verbal means, flight progress strips, other written information, or automation displays. As a minimum, provide aircraft identification and applicable runway/intersection/taxiway information as follows:

Aircraft movements
This information was mentioned in (flyingwithoutfear,2014)

Analyse the physical appearance of the control tower and its contribution to achieve these objectives andexplain about the communication failure procedures.
This data is mentioned in (faa.gov,n.d) says In the past, Airport Traffic Control Tower (ATCT) siting decisions have been significantly influenced by the upper height limits imposed by terminal procedures (TERPS) and controller opinions. Because tower siting (height and location) affects airport safety and construction costs, the FAA had no means to measure quantitatively the improvement in air traffic controller visibility that can be gained by changing the tower height and location on the airport surface, and there was no required minimum criterion for tower height.
This information is supported by (experimentalaircraft,2014)
Preflight -During preflight make sure that you have the correct frequencies with you: check the AIP, NOTAMs, approach and/or enroute charts. Preflight also means that you need to check communications availability for the airports and the route you plan to use. If not sure then a phone call with your destination will solve that problem, also ask if they accept NORDO (No Radio) aircraft.
Garmin SL40 Aircraft Radio – Radio’s can become complex equipment when they are integrated into Garmin G1000 systems like EFIS. Standalone Icom, Bendix King or Apollo/Garmin radio’s are really easy to control. Having the pilots quick reference manual in your flight bag or with the aircraft documentation or manual can be a big help. It will save the day should you become confused about any function of the radio.
ATC light gun -Some aviation charts depict them: ATC light gun signals. Make sure you know them by heart or carry a copy of their meaning with you. Practice these signals every once in a while.
Frequency change -If contact can not be established after a frequency change, go back to the previous frequency or channel and verify with the controller that you have the correct frequency. This is first thing you must do in this case.
Second radio -If you suspect that your radio has failed and you have a second one, set that frequency in the other radio and try again. When I fly an aircraft with multiple radio’s I plan to use all of them, and during a handover I set the next frequency into the other radio and use that one. This way I always have both radio’s checked and functional. Should I need to switch back, its done within a blink of an eye on the intercom panel.
Squelch setting -A squelch is used to suppress the white noise when no station is transmitting, turn the knob clockwise until the noise just about disappears (on radio’s with an automatic squelch you need to pull or push the volume knob). Sometimes after switching and verifying that you have the correct frequency and that the radio is operating correctly it might be that you are just to far away (or flying too low) for the next station. Its signal strength is just too weak to open the squelch you will hear nothing.
First thing I do is to open up the squelch manually (pull/push the volume knob) and listen to the noise/static and other aircraft and retransmit when able. Chances are that you hear them calling you just above the noise level. By the time you get closer, the signal strength will have improved enough so that you can use the squelch again.
Radio Failure -It will not happen that often but radio’s can fail and having a second on standby will save the day. Should it happen, try pulling the fuse wait a couple of minutes and push it in again. This might reset the radio. Should this fail then and you have only one radio, set 7600 on the transponder and determine if you need to divert to an airport where NORAD aircraft are allowed. It is advisable to call ATC after landing to explain the situation.
Altitude -VHF communications rely on antenna’s to be in line of sight of each other to be able to receive their signals. Should you not hear the other station then climb, if possible, a couple of thousand feet. This will improve the range in which you can contact stations.HF communications rely on radio wave propagation by the Earth’s Ionosphere and line of sight is not so much of an issue here.
Relaying-At times you may find that other, possibly higher flying aircraft, are willing to relay your message to the ground station. Sometimes even without asking, because they can hear you and the ground station and its obvious to them that you can not reach or hear ATC.
Transponder
Aircraft Transponder – The transponder code for lost communications is 7600 in any mode (A/C/S). Setting this code will ring bells in ATC facilities and you will most definately get their attention! Again, make sure to explain the situation after landing.
Diversion – If all else fails and your destination is a controlled airport where radio communications are mandatory, then by all means divert to an airport where you can land without a radio and have your radio checked by a radio shop before you continue on to your final destination. Overflying the signal area before entering the circuit/pattern is a wise decision at that time.
Describe about the visual signals and their use, colours and effects of the markings. Also identify other markings in the manoeuvring area and their use.
This information was mentioned in (tc.gc.ca,2012) says A series of green flashes directed at an aircraft means respectively

A steady red light directed at an aircraft means

A series of red flashes directed at an aircraft means respectively

A steady green light directed at an aircraft means respectively 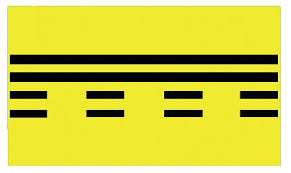 figure02
Aerodrome signs – how to get from here to there safely
Along with aerodrome markings and lights, aerodrome signs are designed to assist you in navigating around an aerodrome.It is essential that you understand the colour coding and meaning of these five types of signs when taxiing on an aerodrome:
1. Location sign:
Identifies the taxiway you are currently located on. It has a yellow inscription on a black background 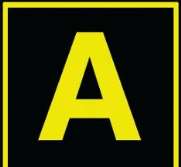 Figure03
Mandatory instruction sign:
Identifies the entrance to a runway or critical area, and areas prohibited for use by aircraft. It has a white inscription on a red background. You must obtain a clearance from ATC prior to proceeding past this point

Figure04
Direction sign:identifies the designations of taxiways leading out of an intersection along with an arrow indicating the approximate direction of turn needed to align the aircraft on that taxiway. They are located before the intersection, normally on the left side and normally with a location sign. It has a black inscription on a yellow background

figure05
Destination sign:Identifies with arrows the directions to specific destinations on the airfield (e.g. runways, terminals or airport services). It also has a black inscription on a yellow background 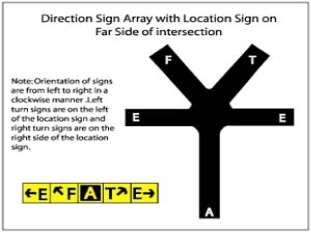 Figure07
Aerodrome lighting
There are many different lighting combinations that may exist on some aerodromes, especially where aircraft operations are conducted in the lower visibility ranges. For taxiing operations around airfields, you should remember: 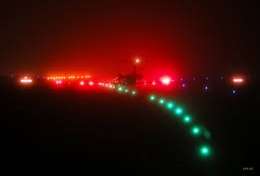 Figure12
Communication capabilities of the users and the role of tower controller
This information is supported by (faa.gov,2014) sat the FAA’s air traffic controllers ensure the safe and efficient flight for about two million aviation passengers per day – or almost one billion people per year. Air traffic controllers safely manage more than 60 million aircraft annually to their destinations.
The U.S. air traffic controller workforce consists of approximately 15,000 dedicated and well-trained men and women working in air traffic control towers, terminal radar approach control centers, and en route control centers managing 30.2 million square miles of airspace.
Air Traffic Control Tower Controllers Work in the glassed-in towers you see at airports. They manage traffic from the airport to a radius of 3 to 30 miles out. They give pilots taxiing and take off instructions, air traffic clearance, and advice based on their own observations and experience. They provide separation between landing and departing aircraft, transfer control of aircraft to the en route center controllers when the aircraft leave their airspace, and receive control of aircraft on flights coming into their airspace.
Terminal Radar Approach Controllers Work in radar rooms, using terminal radar sensors to assist the aircraft until it reaches the edge of the facility’s airspace, usually about 20 to 50 miles from the airport and up to about 17,000 feet, before handing it off to the En Route Center Controllers
En Route Center Controllers Work in 21 centers across the country, in a location away from the airport. You will never see them during the course of your flight, but they will normally direct your aircraft for the bulk of your ride. Controlling traffic usually at or above 17,000 feet, the typical center has responsibility for more than 100,000 square miles of airspace generally extending over a number of states. These controllers give aircraft instructions, air traffic clearances and advice using radar or manual procedures they keep track of the thousands of planes in the sky at any one time. Due to the radar equipment, they work in semi-darkness and guide aircraft on the scope
Reference
faa.gov, (2014) Chapter 3- Airport Traffic Control- Terminal. [Online] Available at: &lt;//www.faa.gov/air_traffic/publications/atpubs/atc/atc0301.html&gt; Accessed on 2nd July 2014 Page
ivao.aero, (2014) Air traffic services. [Online] Available at: &lt;//ivao.aero/training/documentation/books/PP_ADC_Air_traffic_services.pdf&gt;Accessed on 2nd July 2014 Page
flyingwithoutfear, (2014) air traffic control. [Online] Available at: &lt;//www.flyingwithoutfear.com/information-to-help-your-fear-of-flying/the-facts-of-flying/fear-of-flying-air-traffic-control/&gt;Accessed on 2nd July 2014 Page
experimentalaircraft, (2014) Loss of communication. [Online] Available at: &lt;//www.experimentalaircraft.info/articles/communications-failure.php&gt;Accessed on 2nd July 2014 Page
tc.gc.ca. (2012) 2.0 Visual Signals. [Online] Available at:&lt;//www.tc.gc.ca/eng/civilaviation/publications/tp11919-section2-1144.htm&gt;Accessed on 2nd July 2014 Page
airservicesaustralia, (2013) 6. Aerodrome markings, signs and lights. [Online] Available at:&lt;australia.com/wpcontent/uploads/Pilots_Guide_to_Runway_Safety.pdf" target="_blank" rel="nofollow noopener noreferrer">//www.airservicesaustralia.com/wpcontent/uploads/Pilots_Guide_to_Runway_Safety.pdf&gt;Accessed on 3rd July 2014 Page
faa.gov, (2014) Roles and Responsibilities of Air Traffic Control Facilities. [Online] Available at:&lt;//www.faa.gov/jobs/career_fields/aviation_careers/atc_roles/&gt;Accessed on 3rd July 2014 Page
1