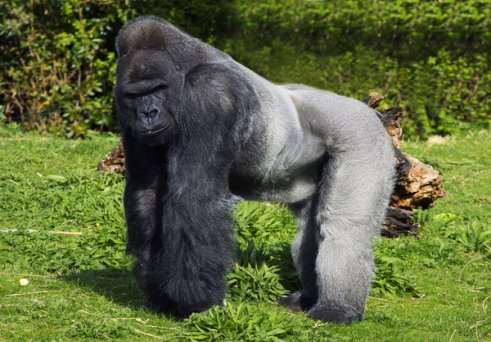 Biological anthropology is also known as physical anthropology.it is an interesting mixture of social studies and biology of people. This study concerned with the biological and behavioural aspects of human beings, and their related non-human primates and their extinct ancestors. To grasp how human evolution, occur from earlier life forms(primates). Primates include (Homo sapiens), the apes, the monkeys and gorillas. we can know about primate behaviour by studying them. If I would like to talk about gorilla. the largest of the living primates.it is ground dwelling herbivore animal that inhabits the forest of Africa. They are also known for their gentle human like behaviour and emotions such as laughter and sadness. They even make their own tools to assist them survive in the forest. Gorillas are stocky animals with broad chests and shoulders. Some of the body parts seem to be same as humans like hands and their small eyes set with hairless faces. They play a very important role in local biodiversity, roaming through large territories assist humans for example to spread the seeds of fruits they consume.

Studies have shown gorilla blood is not reactive to anti-A and anti-B which would in humans indicate type O blood. Moreover, like humans, gorillas have different finger prints.

Classification of Gorillas based on their species:

Gorillas are the largest living primates. They are stocky animals with broad chests and shoulders. Some of the body parts seem to be same as humans like larger hands, eyes, face.Â  There DNA is 97% – 98% identical to that of a human. There forearms are much shorter than the upper arm. The face is black and hairless with small eyes that are close together and prominent nostrils.

Adults males are identified by sagittal crest along the midline of the skull and a small are of white hairs on the black that is why they also known as “silverbacks”. Moreover, eastern gorillas have darker and longer fur on their arms whereas western gorillas have shorter hairs which grey or brown in colour.

Size: adult males weigh up to 200kg whereas females have around half the size. They can reach the height of 1.2 to 1.7 meters when standing on two feet.

They have a well-developed social structure. They forming stable family groups in which dominant male keep the position for years. Usually they are 5 to 10 individuals in one group or vary from 2 to over 50 members. Furthermore, if any male gorilla leaves the group, he wanders alone for many years. whereas female gorillas leave their group at maturity to join other group or single males. But it is very rare in female gorillas and they reproducing in their original groups.

Female gorillas become sexually mature at age of 7-8 years old. but they start breeding several years later. Whereas males are mature later than females. But some of the gorillas starts breeding before the age of 15 years. They have high infant mortality. There is long gestation to single births (8.5) months. Females generally give birth to three or four babies during their reproductive life.

“the mortality rate for gorillas is less than one year old is high, but for the adults the rate is only 5 %. In the wild they might live for 40 years old. in the united states, a captive gorilla was reported to have lived to the age of 54.”

Female will purse their lips and slowly approach a male while making eye contact. This serves to urge the male to mount her. If the male does not respond, then she will try to attract his attention by reaching towards him or slapping the ground. Males incite copulation by approaching a female and displaying at her or touching her. Male gorillas are not active in a caring for the young. But they do play a role in socialising them to other youngsters. “the silverback has a largely supportive relationship with infants in his troop and shields them from aggression within the group infants remain in contact with their mothers for the first five months and mothers stay near the silverback for protection. Infants began to break their contact with their mothers after five months”.by 12 months old infants move up to five meters from their mothers when they enter juvenile period at the third year and this last until their sixth year.”

Gorillas are considered highly intelligent. A few individuals in captivity such as koko, have been taught a subset of sign language like other apes, gorillas can laugh grieve have rich emotional lives, develop strong family bonds, make tools and think about past and future.

Gorillas are mainly herbivorous(vegetation)and they spend almost half of the day in feeding on stems, bamboo shoots and a variety of fruits.

How do gorilla communicate?

As we know gorillas live in the dense rain forests where it is very difficult to see the group members. So, they use mainly vocalisation for communication in accordance with their role as group leader. For newly born babies of gorillas. Vocalisations (screaming)are the most way to attracting their mother’s attention to their needs. However, body parts and facial expression also indicate the gorilla’s mood. Postures signalling mood or intention to the partner are sometimes even used for communication over greater areas. //www.bing.com/videos/search?q=communication+videos+of+gorillas&qpvt=communication+videos+of+gorillas&view=detail&mid=5DAF26CADB7EC10E05E75DAF26CADB7EC10E05E7&FORM=VRDGAR

Moreover, gorilla’s senses resemble those to humans. They also use the senses in their communication not only hearing and seeing, but also touching and smelling. Silverback males have a characteristic smell. In dangerous situations, they emit very specific scent that can smell from many metres that can help to alert the group without producing any noise.

Â  This is very rare that gorillas using tools in the wild. “Western lowland gorillas have been observed using sticks to apparently measure the depth of water and as “walking sticks” to support their posture when crossing deeper water.an adult female used a detached trunk from a small shrub as a stabilizer during food gathering”.

Gorillas construct nests for daytime and night use. Their nests are a simple aggregation of branches and leaves about 2 to 5ft and constructed by individuals. \

“One of the earliest attempts to use a molecular approach to assess the genetic mating system in wild apes was made in a study of mountain gorillas however the conclusions were limited while most gorilla’s social groups appear to be composed of a single mature silverback male along with adult females and offspring, some 40%mountain gorillas group contained two or more silverback males” [Robbins, 1999; Schaller, 1963; Webber and vedder,1983].

Reasons why gorillas are endangered?

Poaching is the illegal hunting that can be used for commercial purposes. Poachers can kill gorillas to sell their meat and various body parts or some time they capture gorillas and keep them alive and use gorillas as private collection of animals.

Diseases:Â Â  due to the genetic similarity between humans and gorillas, they are also victims of outbreaks that can affect people.one of the major virus is known as Ebola virus and poaching are the threats of the western lowland gorillas

Other diseases affecting gorillas are polio, hepatitis A, tuberculosis and intestinal parasites