Photodynamic therapy is a new cancer treatment modality that uses singlet oxygen and other reactive oxygen species to kill cancerous cells. However, most conventional photosensitizers which have FDA approval are toxic to not only cancerous cells but also to normal cells. Most of these PSs can be stimulated by ultraviolet-visible  wavelength light and thus results in unwanted toxicity under sunlight and bright room light exposure. Therefore, PDT treated patients are required to avoid bright light for up to six weeks. Copper cysteamine(Cu-Cy) nanoparticle, which was invented by our group in 2014, is a new type of photosensitizer and a novel radiosensitizer that can be activated by X-ray, UV-light, microwave, and ultrasound to produce singlet oxygen and other forms of reactive oxygen species for cancer treatment1–4. The Cu-Cy nanoparticle has strong absorption in the UV region but not in the visible region. Therefore, Cu-Cy treated a patient may not have to avoid room light and sunlight. In the present article, we report comparative toxicity studies of Cu-Cy and PPIX (an FDA approved PSs) and show that while Cu-Cy is toxic to cancer cells, it is much safer to normal cells. On the other hand, PPIX is toxic to both cancer and normal cells.

Photodynamic therapy (PDT) is a cancer treatment modality in which photosensitizers (PSs) are practiced to generate highly reactive oxygen species (ROS) by means of photoexcitation, such as hydroxyl radicals (. OH), singlet oxygen (1O2 ), as well as peroxides (R–O–O.) which irreversibly damage cancer cells5–7 . Most conventional photosensitizer such as PPIX can be activated by UV-Visible light6,8 which makes this photosensitizer toxic under sunlight or bright light exposure9. Furthermore, Cu-Cy has an absorption band in the UV region with a peak absorption at about 365 nm. It absorbs little or no light in the visible region which may be advantageous over other conventional photosensitizers such as PPIX which has strong soret band at around 400 nm and other Q-bands between 500 and 630 nm []. Protoporphyrin IX(PPIX) is an FDA approved photosensitizer. PPIX has a strong Soret absorption band at 405 nm and four relatively strong Q bands between 500 and 630 nm10.On the other hand, Cu-Cy has only one absorption peak at 365 nm 11. Therefore, Cu-Cy does not produce a significant level of singlet oxygen or ROS under room light or sunlight excitation. Herein, we demonstrate that Cu-Cy is much safer as compared to PPIX at the same concentration under room light or sunlight excitation.  Historically, conventional photosensitizer treated patients had to avoid sunlight.

Cu-Cy nanoparticle was invented by our group in 201411. It is a new type of photosensitizer and radiosensitizer that can be activated by X-ray1,11, UV-light11, microwave2, and ultrasound3 to produce singlet oxygen and other forms of ROS species for cancer treatment. The ability of Cu-Cy to be excited by microwave, ultrasound and X-ray make it a promising candidate for new nanomedicine for cancer treatment

If PPIX is taken up by the skin, an acute, painful and mostly non-blistering type of photosensitivity is the most common symptoms12. To prevent symptoms, patients are forced to avoid light which interferes with professional and other daily activities and impairs quality of life. PPIX either in blood in the dermal vessels or after uptake into skin cells absorb light energy and transfers this energy to oxygen, generating reactive oxygen species (ROS) which can lead to cytotoxicity through protein, DNA, and lipid damage13. The requirement that patients needed to avoid sunlight also makes patients vitamin D deficient 9,14.

Cu-Cy nanoparticles were synthesized using a facile green synthesis method[]. Briefly, CuCl2.2H2O (91mg) was dissolved in DI water, followed by addition of cysteamine hydrochloride (127mg) and stirred for 2 hrs under an N2 atmosphere. After adjusting the pH value to 8 by adding a 2.5M NaOH solution, the solution was stirred for about 2hr at room temperature until the color turned to deep-violet due to oxidation. The solution was then heated to its boiling temperature for 30 mins; the deep-violet color changed to whitish murky color which is red luminescent under UV light excitation. The boiling solution was allowed to cool naturally at room temperature. The Cu–Cy particles were obtained by centrifuging and washing the crude product with a solution of DI water and ethanol (v/v = 5:4) five times followed by sufficient sonication. Cu-Cy particles were then dried by placing them under vacuum at room temperature.

The absorption and photoluminescence spectra were measured using a UV-Vis spectrophotometer (Shimadzu UV-2450) and a photoluminescence spectrophotometer (Shimadzu RF-5301PC, Tokyo, Japan) respectively. Cu-Cy particles were dispersed in DI water by ultra-sonication for several minutes for UV-Vis and PL measurement. PPIX solution was prepared by first dissolving in DMSO and then diluting with DI water.

KYSE30 and DM6 were chosen as cancer cell lines, whereas HET1A  and HDF cell lines were chosen as normal cell lines. Cells were seeded in 35mm Petri-dish at a density of 200,000 cells/plate and were incubated at 37 0C in a humidified atmosphere of 5% v/v CO2 for 24hrs. Then, different concentrations of 1ml Cu-Cy nanoparticles and PPIX were added to the Petri-dishes. After incubating for 24 hrs., these Petri-dishes were exposed to either room light (RL), sunlight (SL) or neither and incubated for 3 hrs at 370C in a humidified atmosphere. Cal AM/EthD-1 staining was performed by incubating SL/RL treated cell samples with 1 μmol/L calcein AM and 8 μmol/L ethidium homodimer-I (Live/Dead® Viability/ Cytotoxicity kit; Invitrogen, France) for 45 mins at 37°C inside the incubator [21]. Nonfluorescent cell-permeant calcein-AM enters the cell and is cleaved by ubiquitous esterase in living cells, producing calcein which is well retained within live cells and gives an intense uniform green fluorescence (excitation/emission ~495/515 nm). Ethidium homodimer-I enters cells with damaged membranes and then binds to nucleic acids, resulting in a 40-fold enhancement of fluorescence and producing a bright red fluorescence in dead cells (excitation/emission ~495/635 nm). The cells were imaged using an Olympus IX-71 fluorescence microscope using a suitable filter.

The cytotoxicity of Cu-Cy and PPIX under sunlight and room light exposure were evaluated by means of MTT assay. 10,000 cells/well were seeded in 96 well plates and incubated for 24 hours for the completion of cell attachment. Then, five different concentrations of each Cu-Cy and PPIX were prepared in cell media and were added to the 96 well plates (8 wells per concentration). One column of plates was left untreated and was considered as a control. Then, the plates were incubated for another 24 hours to allow cells to uptake particles. Cu-Cy and PPIX treated cells were then exposed to sunlight or room light for 10 mins and were then incubated for 3 hours. MTT assay was prepared by diluting 5 mg/ml stock solution with media by a factor of 10. 100 uL of MTT assay was added to each well, replacing old media. The 96 well plates were then incubated for 3 hours at 370C under humidified atmosphere.  After incubation for 3 hours, MTT solution was removed and 100 uL DMSO was added to solubilize formazan crystal. The formazan crystal becomes purple-colored with DMSO dissolution. The viability of cells was directly dependent on the absorption of formazan solution.

96 well plates then either exposed to room light or sunlight for 10 mins or neither room light or sunlight exposure. After exposing to RL or SL, 96 well plates were incubated for 3 hrs. 0.5 mg/ml MTT solution added to each well and incubated for 3hrs. Yellow colored MTT converted into purple colored formazan crystal. Formazan is insoluble in aqueous solution. Formazan was solubilized by adding 100 Ul DMSO to each well. The absorbance of formazan is directly proportional live cell counts and can be employed to present a relative cell viability as compared to control.  The absorbance of Formazan solution was measured using a multiskan FC microplate photometer (Fisher Scientific) at 540 nm.

Cell viability was calculated as follows:

Cu-Cy nanoparticles were coincidentally invented by our group in 201411. It can produce singlet oxygen and reactive oxygen species when excited by UV-light, X-rays, ultrasound, and microwave 1–3,11 and can be used to kill cancer cells effectively. Detailed synthesis method and optical properties of Cu-Cy were reported in our other papers 11. Modified facile synthesis method along with its optical properties was reported in our recent paper (Pandey et. al). 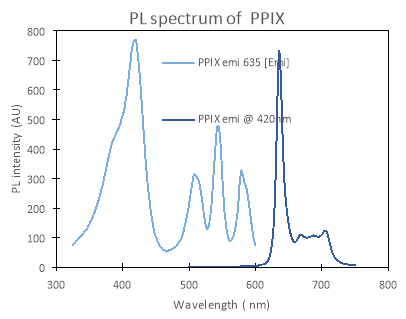 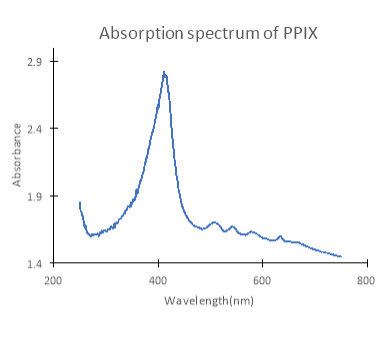 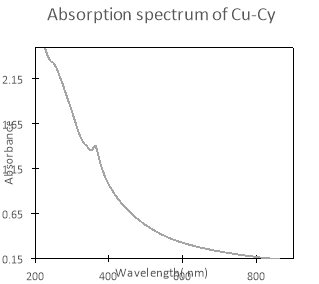 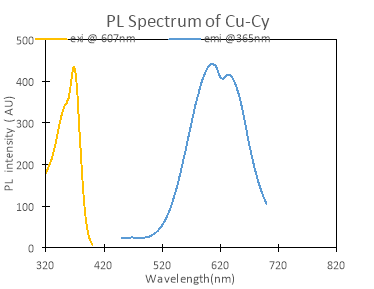 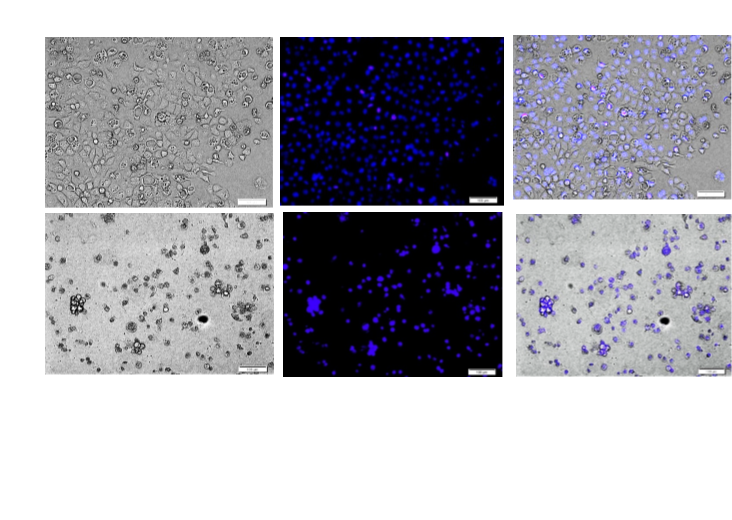 We chose two cancer cell lines (DM6 and KYSE30) and two normal cell lines (HDF and HET1A).  MTT assay was conducted to investigate the cytotoxicity of Cu-Cy and PPIX under dark, room light, and sunlight excitation. Cells were allocated to different groups: Control group (no Cu-Cy and PPIX applied), Cu-Cy (0.23-120 mg/L)) and PPIX (0.23-30mg/L) in 96 well plates.  All these groups were either exposed to no light (dark toxicity), room light or sunlight for 10 minutes. Following the treatment, cells were incubated around 4 hours and 0.5 mg/ml MTT solution applied to each well of the 96 well plates and incubated for 3.5 hours. Formazan crystals were then dissolved in 150ul DMSO. 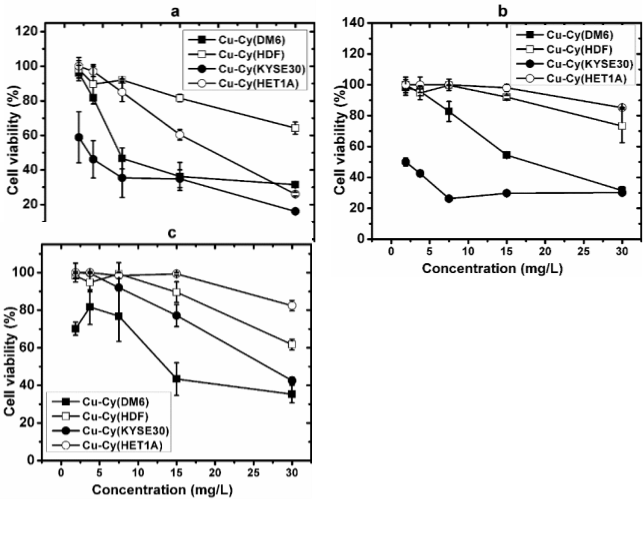 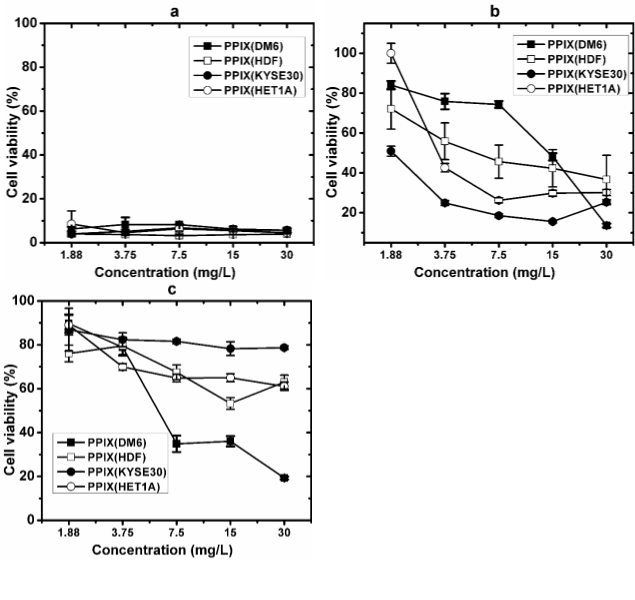 Figure 3a and b represent live-dead cell assay on Cu-Cy and PPIX treated HDF and DM6 cells exposed to room light for 10 mins. As expected, Cu-Cy did not show significant toxicity to the normal HDF cells, but they posed significant toxicity to DM6 cell lines. The result is quite similar to that of sunlight. More interestingly, PPIX shows minimal toxicity to both HDF and DM6 cell lines under room light excitation. This result is consistent with the MTT assay. However, very few PPIX treated cells were found dead under room light excitation. This does not match the result from MTT assay where under room light or dark condition, PPIX posed significant toxicity. This may be because of limitation of both MTT and live-dead cell assay. Live-dead assay stains dead cell only if it is completely dead. It may not stain cells that are in early apoptosis. MTT assay is based upon esterase activity of cells. Any low activity due to dying cells will be reflected in MTT assay but it cannot be stained dead by live-dead cell assay.  However, Cu-Cy toxicity matches well 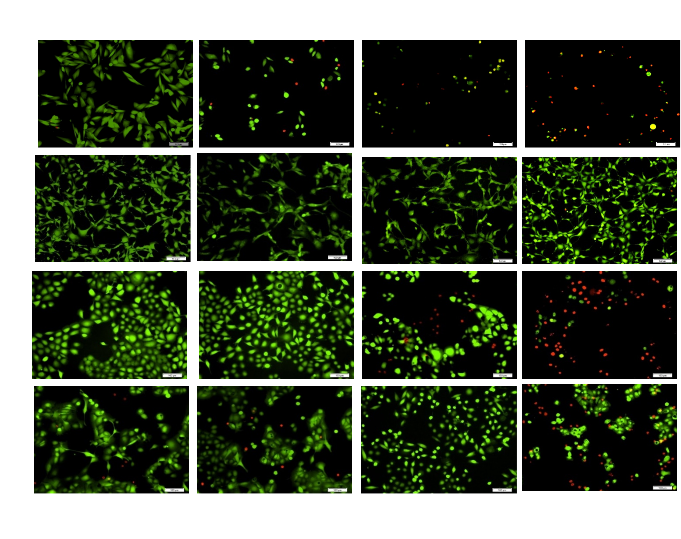 for both MTT assay and live-dead assay. 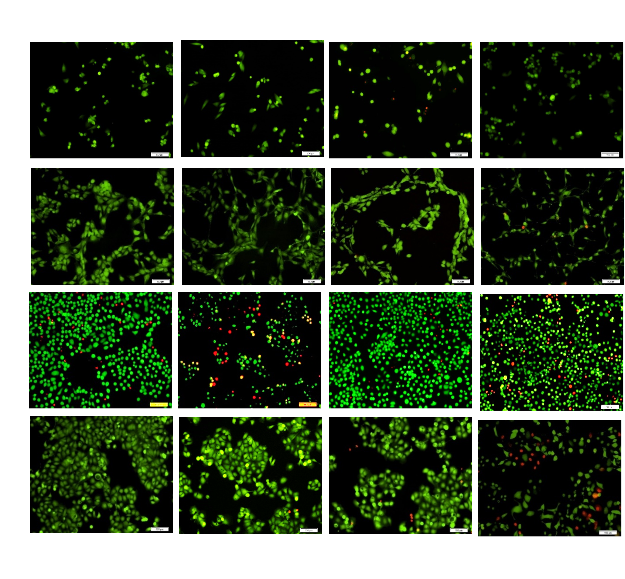 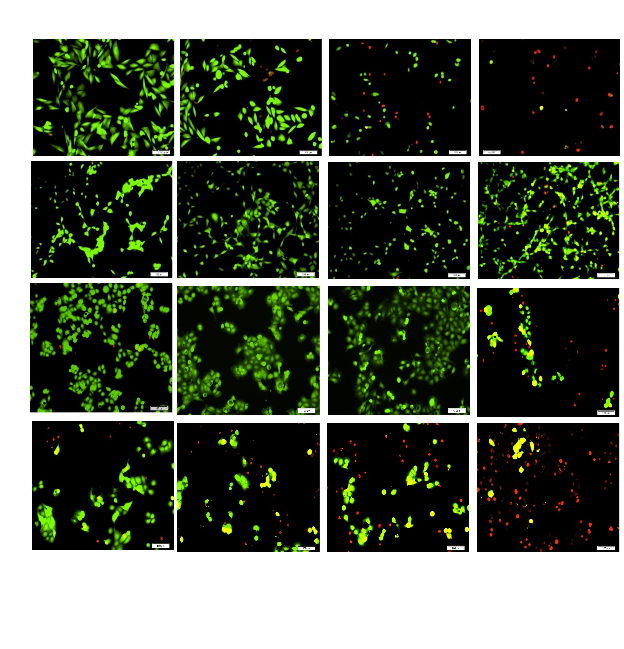 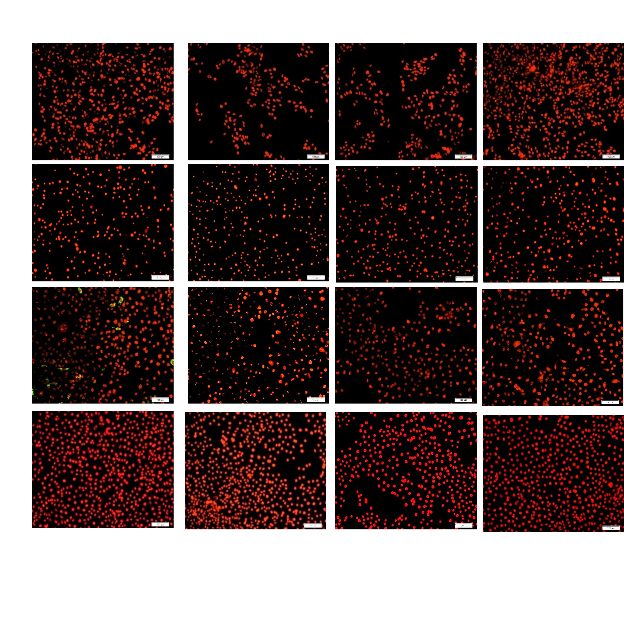 It can be activated by X-ray, MW, US or UV light 2,11. It is also safer as it does not absorb in the visible wavelength region. PPIX treated patients may not have to avoid light at all. PPIX is an effective photosensitizer that can be activated by UV light, visible light, X-rays, and microwaves. Moreover, the singlet oxygen production efficiency excited by UV at 365nm in PPIX nanoparticles is almost the same as in protoporphyrin IX (PPIX) which is a well-known, FDA approved commercially available photosensitizer17. We used RNO-IMD as a probe to measure singlet oxygen. This probe is not specific to singlet oxygen but can also measure other reactive oxygen species (ROS) such as hydroxyl radical. To confirm whether PPIX produces singlet oxygen or other ROS, we applied sodium azide (NaN3), an effective singlet oxygen quencher to PPIX containing RNO-IMD probe. After applying sodium azide, ROS production measured by RNO-ID decreased significantly, which indicates that most ROS produced by PPIX was singlet oxygen. 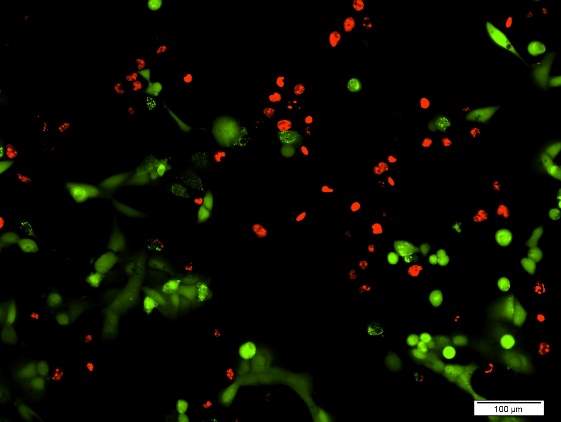 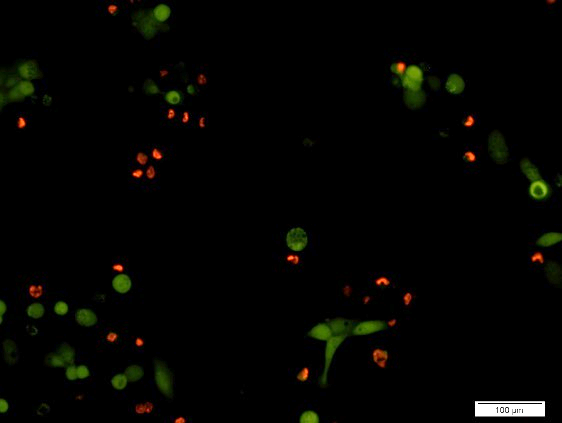 To determine if the selective toxicity of Cu-Cy is sunlight excitable, we performed MTT assay  of Cu-Cy to Kyse30 and HET1A under room light or dark condition. Cu-Cy+ SL, Cu-Cy+RL, and Cu-Cy+NL has cell viability to kyse30 ………… and HET1A ………….. at 30 mg/L. The difference in toxicity was not significant to both kyse30 and HET1A at  all concentration used. This result implies that Cu-Cy can not be excited by sunlight to produce significant toxicity. Also, the Cu-Cy kills significantly more cancer cells than normal cell at the given concentration. The mechanism is not clearly understood yet.