Introduction and statement of intent:

Students are exposed to a lot of stress during the college admissions process. These increased stress levels come with some negative consequences like the increase in consumption of caffeine. The objective of this academic project is to find out whether the number of colleges high school seniors are applying to increases the consumption of stimulant substances like caffeine. I will explore the relationship between the amount of college applications and the daily consumption of coffee within the population of high school seniors. I selected this topic because, as a senior, the massive number of college applications need to submit has affected noticeably the quantity of caffeine I personally consume. On the basis of this study I will try to know if this is a rule that can be applied in a more general basis or not.

In order to collect the primary data, I used direct interview method. For accurate and reliable information, the data was collected from 50 seniors in different schools in different countries. I collected information regarding different possible variables in order to be able to decide which one would give me the most accurate information for the exploration. Finally, I decided to stick to the data related to the number of cups of coffee that a student takes daily and the number of colleges that student is applying to. I will be using in order to get to a conclusion, my data, several mathematical calculations to see if there is a relation between the two variables and use of scatter diagram for better presentation and understanding of the topic.

Initially, to find out about the relationship between my two variables (number of college applications and coffee consumption), my data will be plotted on an scatter-diagram, as well as find the Pearson’s correlation coefficient (r). I will effectuate a rather a chi-squared test or the regression equation depending on the value of r that obtain to make some predictions. This, will allow me to determine the liability of the regression line to make predictions about my data, and if the variables are independent or not by testing the null hypothesis in the chi-squared test if necessary.

Correlation is used to define the linear relationship between two continuous variables. A correlation could be positive, (both variables move in the same direction), or negative (when one variable’s value increases, the other variables’ values decrease). Correlation can also be zero (variables are unrelated). The strength/qualitatively and direction of the linear relationship between two or more variables.

between each of the two variables and on other hand.

Mathematical Process to get the Correlation Coefficient (r):

Step 3: After multiplied all the values to complete the chart, add up all of the columns from top to bottom.

Step 4: Use the following formula to find the Pearson correlation coefficient value.

Step: 6 Solving with the formula above by plugging in all the correct values, the result is thecoefficient value.

The use of mean and standard deviation in the calculation suggests the need for the two data samples to have a normal distribution.

In the result of the calculation, the correlation coefficient can be interpreted to understand the relationship. 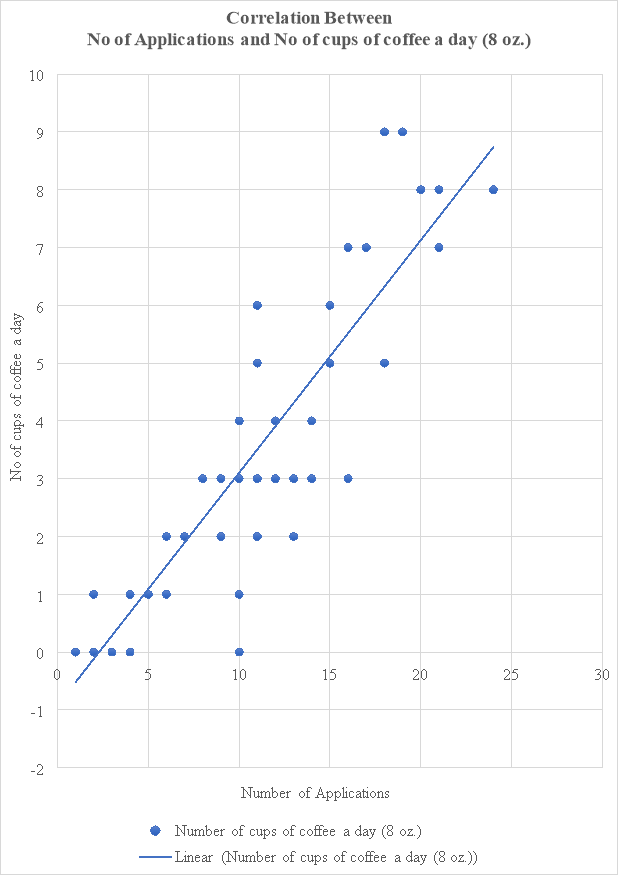 In the scatter diagram it is shown, the value of the independent variable (number of applications) along the X-axis and the value of the dependent (number of cups of coffee a day) on the Y-axis. For each pair of X and Y values (Xi, Yi), I plotted dots on graph paper for the pairs of observation. The diagram of dots obtained is called scatter diagram.

The Pearson correlation coefficient measures the strength of the linear relation between two variables. It can be used to estimate the population correlation, ρ.

This graph shows that there is highly positive correlation between number of applications and number of cups of coffee a day (8 oz.) among high school students.

There are some limitations of this research project which may lead to wrong conclusions:

Correlation are always based on available data and it does not allow me to go beyond this data. There are number of factors other than number of applications and (Independent Variable) which may influence on number of cups of coffee a day (8 oz.) (Dependent Variable) of the students– such as stress, socio economic conditions, relation with friends and family members etc.

On the basis of the statistical data and mathematical calculations, there is a high degree of positive correlation between number of applications and number of cups of coffee a day (8 oz.). The number of college students who suffer from stress-related problems appears to be on the rise.

Occasional stress is an unavoidable part of our routine life. Small amounts of stress can even have a positive effect on students, allowing us to push themselves when they encountered a difficult task. However, high levels of stress on students over a prolonged period of time are linked to increased rates of depression, anxiety, cardiovascular disease, and other potentially health-threatening issues. This conclusion shows us how important it is to learn how to manage stress by students before they suffer any adverse effects. It may be useful to potentiate the rise of awareness in identification of potential stress risks, stress management techniques, and resources that should be available to all high school students. However, we should not forget there are other factors that may affect the relationship between these two variables.