The Comparative Advantage has had a direct effect on international trade and voluntary trade. The theory explores how to create mutually beneficial gains through trade between countries through comparing opportunity costs. Consider the following equation for opportunity cost:

, if both China and Canada produce steel and wool, but China produces steel at a lower opportunity cost than Canada (meaning that they give up less monetary assets, goods, or labour costs to produce it), and Canada produces wool at a lower opportunity cost than China, each country has a comparative advantage against one another. This is where mutually beneficial gains of each country comes into play, if Canada chooses to trade some of the wool they have produced for metal, they are gaining more metal then they would have if they had chosen to create both the wool and metal themselves (Cohen & Howe, Scarcity, opportunity cost, and trade, 2010). The benefits of the comparative advantage are simple, when a person wakes up in Canada on a cold winter morning and enjoys a glass of orange juice and a cup of coffee, they are enjoying the benefits of the comparative advantage theory. This is because Canada is not able to produce cocoa beans or grow oranges, therefore countries such as Brazil and the USA have a comparative advantage, and Canada must import these goods from them. In Canada much of what makes up the gross domestic product comes from exports and imports, in fact Canada’s import 34% of their goods, and export 36% of GDP.

it becomes apparent of the direct impact this theory has on the Canadian economy, and how it is detrimental for its continuation and growth (Cohen & Howe, Globalization and Trade Policy, 2010). Although there are many clear benefits regarding the comparative advantage, there are a few complications and criticisms that must be taken into consideration. The main issues with this theory are the effects of trade on the country doing the trading, these concerns include prices of goods in the country, production levels of said goods, employment levels, who exports and imports what, consumption levels, wages and incomes and welfare effects. These issues can be affected both positively and negatively by uncontrollable forces such as technology and government and can have a direct impact on a countries GDP (Suranovic, 2007). Some other areas of concern include relative prices and exchange rates not being taken into consideration, overstating of benefits and ignorance of costs such as transport costs and sea and air pollution, as well as the complexity of the real world in comparison to the simplistic example of two countries trading goods (Economics Online, n.d.).

David Ricardo began as a stock broker for the London stock exchange in the late 1700s, during this time he gained great wealth that allowed him to further develop other interests such as science and economics. At the age of 27 Ricardo read The Wealth of Nations by Adam Smith, and this commenced ten years of studying and by the age of 37 David Ricardo his first published work called The High Price of Bullion, a Proof of the Depreciating Bank Notes (Spengler, 2014). Ricardo was a true believer in the quantity theory of money, which is the belief that money supply has a direct relationship with price. In 1815 Ricardo published an article called Essay on the Influence of a Low Price of Corn on the Profits of Stock, during which he expressed his opposition to Corn Laws, which at the time caused a restriction on the importation of wheat. As a result of this, Ricardo developed the idea of comparative costs, which is now known as the comparative theory or the Ricardian Model (Library of Economics and Liberty, 2008). In his book On the Principles of Political Policy and Taxation Ricardo suggested that by having an absolute advantage (where a country makes their own goods and does not trade) a countries profits can never increase. He advocates that foreign trade can increase profits by bringing food and necessities into the market at a lower price thereby reducing wages and increasing profits. Ricardo asserts that this theory provides advantages to all consumers, as well as producers as they gain more product but costs remain the same (Ricardo, 1817). Ricardo suggests that a country can benefit greatly from trade through the realization and optimization of their comparative, and absolute advantage goods (Suranovic, 2007).

The comparative theory has had ample effect on the global and Canadian economy. For the purposes of this report the focus will be on the Canadian economies effects pertaining to the comparative theory and free trade. In 1989 Canada created a Free Trade Agreement (FTA) which allowed them to trade their goods globally with other countries, five years later the North American free-trade agreement (NAFTA) was implemented to allow free trade between Canada, Mexico and the United States of America. These events have drastically reformed the Canadian economy to what it is today (Schwanen, 2013).

Canada relies heavily on free trade to maintain its GDP, specifically through exports and imports. Canada has become the ideal example of how the comparative theory can benefit a country, this is because Canada has much better technology then other countries and has many resources to create its own products and services, but through free-trade Canada is able to grow economically and provide an abundance of goods to its residents. International trade has the ability to increase incomes, saving and investment, all of which have the ability to positively affect the economy. There are many determinants that must be taken into consideration when determining a countries comparative advantage, these include; resource endowments (availability of resources), human skill (such as engineers, programmers, etc.), technology, demand patterns, specialization, business practices, and government policies (Gupta, n.d.).

In recent years Canadian exports and imports have been increasing steadily. Exports are comprised of all goods leaving the country such as all goods grown, produced, gathered or manufactured within said country). In 2013 the Canadian merchandise export values increased 3.6% from the previous year, and 1.5% in the last 10 years. Exports to the United States have also been steadily increasing to a current 75.8% of all exports (See Figure 1), and the total value of all exports in Canada in 2013 was $471.4 billion. Imports are comprised of all goods that have entered the country, these include any goods that have crossed boundaries. In 2013 the Canadian merchandise imports increased 2.8% from 2012, and 3.3% in the last 10 years. This data displays a clear increase in imports over exports, which has created a trade deficit in 2013(See Figure 3) (Statistics Canada, 2013).

Political decisions have a considerable amount of power regarding the comparative theory and free-trade. These decisions include political pressures regarding trading agreements, creation and implementation of policies, export and import interests, and negotiation between countries (Grossman & Helpman, 1993).

In Canada, the comparative advantage lies within industries that excerpt natural resources and raw materials. These include wheat, meat, seeds, natural gas, metals, wood and paper. In order for Canada to sustain this comparative advantage it must maintain continual green development to ensure natural resources are still competitive in comparison to other countries resources. Political policies must address these concerns and ensure the prosperity of Canada’s natural resources while still maintaining a high level of exports and imports, as they directly impact the country’s gross domestic product. Canada also has a comparative advantage within the auto industry, as well as aerospace, insurance and communication industries (The Conference Board of Canada, 2013). It is detrimental to Canada’s future economic growth as well as their strengthening of the comparative advantage to ensure technological advances are being made and trade agreements with technologically innovative countries are being made. Technology accounts for 5% of Canada’s GDP, and must be able to compare in such a competitive global market. Political figures are responsible for determining and advising on sanctioning policies and identifying emerging businesses to strengthen Canada’s digital advantage (ICTC, 2013).

Development of the Comparative Advantage

Levchenko & Zhang, A. A. (2014). The Evolution of Comparative Advantage: Measurement and Welfare Implications. Retrieved from The National Bureau of Economic Research: http://www.nber.org/papers/w16806.pdf

Library of Economics and Liberty. (2008). The Concise Encyclopedia of Economics: David Recardo . Retrieved from http://www.econlib.org/library/Enc/bios/Ricardo.html

Ricardo, D. (1817). On the Principles of Political Economy and Taxation. Retrieved from Library of Economics and Liberty: http://www.econlib.org/library/Ricardo/ricP2a.html#Ch.7, On Foreign Trade, comparative advantage

The Conference Board of Canada. (2013). Canada’s trade strengths come from natural resources and related industries. Retrieved from The Conference Board of Canada: canada_s_trade_strengths_come_from_natural_resources_and_related_industries.aspx" target="_blank" rel="nofollow noopener noreferrer">http://www.conferenceboard.ca/press/newsrelease/12-06-19/canada_s_trade_strengths_come_from_natural_resources_and_related_industries.aspx 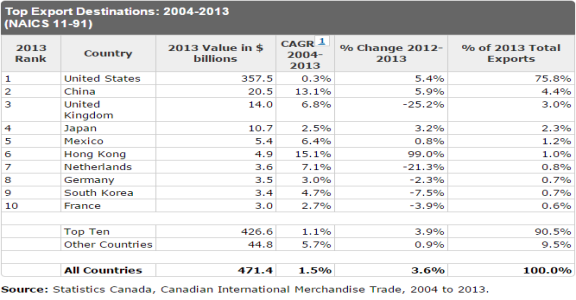 Figure 1. Top Export Destinations. An overview of total exports from Canada to other countries. 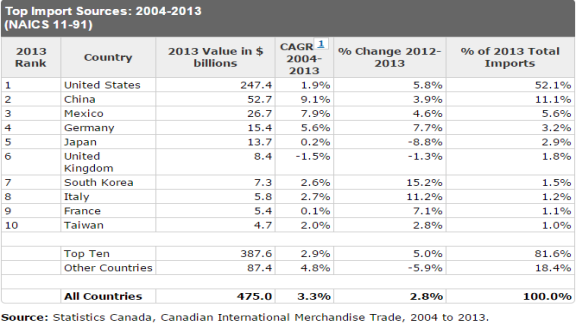 Figure 2. Top Import Sources. An overview of total imports to Canada from other countries. 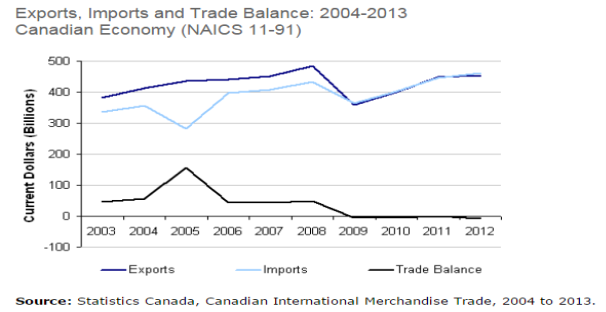 Figure 3. Exports, Imports and Trade Balance. A comparison of exports, imports, and the trade balance (deficit) from 2004-2013.