History Of Art From Middle Ages To Modern Times

History of Art from Middle Ages to Modern Times 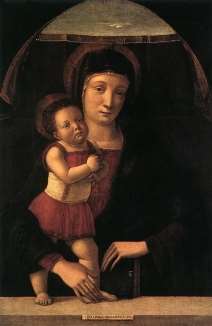 The Madonna and Child images introduces one of the most amazing characteristic subjects in Bellini’s art. However, this kind of work was not only used by Bellini. (Stokstad & Cothren, 2013) Minor and medium to small holy images designed for isolated and domestic ownership were unique features of art during the beginning 15th-century. Bellini’s depictions are famous due to a gentle pressure that unceasingly stalemates the mother and child in an association of thoughtful bleakness. (Madonna with Child 1450-55, n.d.) The replicas for these depictions of a Madonna were frequently done by Byzantine and Graeco-Cretans and were distributed in Venice.

The unmoving, severe-looking Madonna and Child is comparable to Bartolomeo Vivarini’s work. The slender limbs and motionlessness reveal the effect of Jacopo as well. However, the positively defined line of the Child and his transparent clothing conceivably originates from Squarcione, who was definitely an inspiration to Bellini during the creations of his work. (Madonna with Child 1450-55, n.d.) The presence of light and shadow are evident in this particular work of art. The artist used color to contrast against a dark base showing composition of the figures. Facial features are not sharp yet there are shadows present on the face and limbs implying that there is light coming from their right side, illuminating them. 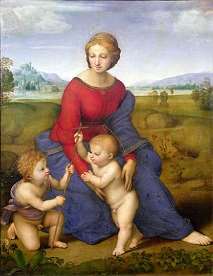 The three individuals demonstrating immobility are depicted in an olive green field. These figures are accompanied by gentle facial expressions and impassioned hands. The Virgin Mary is depicted in a contrapposto posture. The artist seems to have used colors to signify specific details of the painting. The blue on Mary’s robes indicates the ecclesiastical and the red represents Christ’s passing. The Madonna stands still as the Mother Church with Christ’s martyr. Her eyes are fixed on the young Christ that sits on her lap while John the Baptist’s attention is also on the boy. I believe this is signifying his importance. The crown that sits upon her head seems to be curved to the left and slightly inclined as she holds up Christ while he rests tracing the small cross held by John. (Madonna of Belvedere, n.d.)

Raphael truly congests the reality of Mother Nature in this work and also in many of his other works. His style consisted of more real and natural figures. (Stokstad & Cothren, 2013) Distinct from previous depictions created during the Renaissance, this Madonna is illustrated within nature where most were illustrated sitting on a chair during this period. This painting provides a beautiful and impressive perspective in the contextual aspect as if to imply that the countryside itself is her chair. (Madonna of Belvedere, n.d.) Although the figures are depicted as immobile, shadows exist under the figures and also within the hands of the Madonna as she holds Christ. Unlike Bellini, Raphael gave his subjects some more realistic and natural facial expressions. The use of light and color really brings out the joy of the characters. 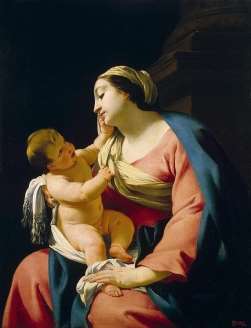 This preparation by Vouet was appropriately recognized and widespread. It was a recurrent style used by him during this period. The facial expressions of the Virgin consist of the outline of the artist’s wife, who had unfortunately expired before. It could be that Vouet created this illustration during a nostalgic and emotional period. (Madonna with Child, n.d.)

Nevertheless, the image generates the proof of a massive effort due to the amount of natural detail presented. The character of the Madonna seems to be chiseled from a large rock, she is smooth and angular. It seems this painter struggled to highlight the spiritual tenderness of the Madonna and the Child. The child is displayed with the creases of the Madonna’s clothing as his mother gazes upon him with affection and allows him to explore her face and clothing. (Madonna with Child, n.d.) The color used in this painting provides a contract to its dark background. The composition of the figures are evident through their position and color. This image inspires deep emotions of sadness and joy as they are depicted in a dark environment but are somewhat lively. The details of the lines of the characters are extraordinary. The child’s body consists of natural bodily features as he sits upon the Madonna. The shadows used on the body of the child and the clothing of the mother are so realistic and imply more movement than the previous images discussed in this paper.

The commencement Renaissance provided the emergence of more realistic portrayals of nature and human figures by artists who were stimulated by ancient Greek and Roman art and culture. (Stokstad & Cothren, 2013) The works illustrated during the Early Renaissance (14th and 15th century) demonstrate some of the severe medieval features, whereas masterpieces created during the High Renaissance period (late 15th and early 16th century) expose the wonderful scopes and balanced configurations related to the standards of the Classical world. (Stokstad & Cothren, 2013)

The art created during the Baroque period (17th century) personified a lively energy that reflected the edgy essence of its era. In paintings, theatrical descriptions of faith motivated by the Catholic Church’s Counter-Reformation contrasted with animated demonstrations of the secular world normally created in the Protestant north. (Stokstad & Cothren, 2013) This was a period that consisted of more emotional and detailed works of the natural world. During this period, it seems that medieval influence was completely eradicated unlike the previous creations of the renaissance age.