How To Explain Pictures To A Dead Hare A Spiritual Analysis

How to Explain Pictures to a Dead Hare: A Spiritual Analysis

When Joseph Beuys performed his piece, How to Explain Pictures to a Dead Hare (November 26, 1965 at Galerie Schmela in Düsseldorf, Germany), he presented a new way of thinking about the structure and meaning of art. Unlike traditional artists who practiced in painting, drawing, or sculpture, Beuys practiced a then new media of art called Performance Art. Like the name suggests, performance artists did not make objects to be displayed, instead they displayed themselves by creating “‘live’ presentations.”[1]

In his performance, Beuys makes his way around a small room while whispering inaudibly to a hare carcass which he carries in his arms. Throughout the piece Beuys would have the hair burrow while holding its ears up with his teeth, he would lie down in the middle of the floor, and pose himself or the hare in different positions around the space. The audience viewed the three-hour long scene through a window of the gallery. Felt was attached to Beuys’s left shoe, and steel to his right. The sound of the steel hitting the floor was the only break in the silence of the piece. Honey and gold leaf covered his head and face. Around the room, pictures hung on the walls and a dead fir tree laid on the ground. When the three hours passed, the audience was allowed into the gallery with Beuys sitting in a chair with the hare on his lap, his back facing them (see Figure 1).

Every part of Beuys’s performance held meaning, both his actions and the specific items he chose. The honey stood for life and the gold leaf stood for wealth. Together they also created a shaman aura for Beuys which connected him to the spiritual. The hare represented death and mortality. The felt personified spiritual warmth, and the steel stood for hard reason and a conductor for invisible energies. The materials themselves were unorthodox and were used to challenge the conventions of art.

With How to Explain Pictures to a Dead Hare, Joseph Beuys revolutionized conceptual art. Conceptual art “markedly de-emphasized or entirely eliminated a perceptual encounter with unique objects in favor of an engagement with ideas.”[2] Beuys had a “need to replace conventional art with a more spiritual and natural form of communication.”[3] He created art that was supposed to be “felt or intuited by a viewer rather than understood intellectually.”[4]

The concept of spirituality is the foremost subject of How to Explain Pictures to a Dead Hare. Even though all the afore mentioned items have their own individual meanings, they all contribute to the central demonstration of spiritual importance. An article in Phaidon describes the ending of Beuys’s performance as him “protectively cradling the deceased hare in a manner akin to the Madonna in a pietà.”[5] This is a profound comparison. The Madonna in a pietà is one of the most produced images that we see in the history of art. Before the sixteenth century, the Madonna in a pietà was seen more than an emoji is seen today. It was the epitome of religion and devotion. In turn, comparing How to Explain Pictures to a Dead Hare to the Madonna in a pietà alludes to the notion that Beuys’s performance is also the picture of religion and devotion.

The hare is the most significant aspect of Beuys’s piece. It is seen in many other artworks by Beuys. For Beuys the hare was an integral part of the spiritual message. According to him, “[The hare] has a strong affinity to women, to birth and to menstruation, and generally to chemical transformation of blood. That’s what the hare demonstrates to us all when he hollows out his form: the movement of incarnation. The hare incarnates himself into the earth, which is what we human beings can only radically achieve with our thinking: he rubs, pushes, and digs himself into Materia (earth); finally penetrates (hare) its laws, and through this work his thinking is sharpened then transformed, and becomes revolutionary. Even a dead animal preserves more powers of intuition than some human beings with their stubborn rationality. Human thinking was capable of achieving so much, but it could also be intellectualized to a deadly degree, and remain dead and express its deadliness in the political and pedagogical fields.”[6]

This disdain for rational thinking is why Beuys remained silent in his piece. He wanted the audience to come to the conclusion that How to Explain Pictures to a Dead Hare is about the spiritual connection between death and humanity and the invisible energies that guide nature and our lives by themselves. Beuys wanted an unspoken connection between him and the audience, the same connection he alluded to in his performance. He did not want to lay the meaning out in a clear and rational form such as the artists of the high renaissance. This was not a piece that the viewer should ponder and try to decipher with their head, instead it was supposed to be felt with as much natural instinct as a hare would use when burrowing and creating a home. 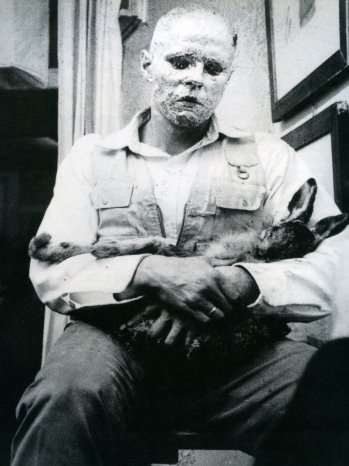 Figure 1. Joseph Beuys in his final stance of his performance, How to Explain Pictures to a Dead Hare. He is seen here sitting in his chair with the dead hare cradled in his arms. (November 26, 1965 in Schmela Gallery, Düsseldorf, Germany)