Life And Work Of Brian Duffy

Life and Work of Brian Duffy 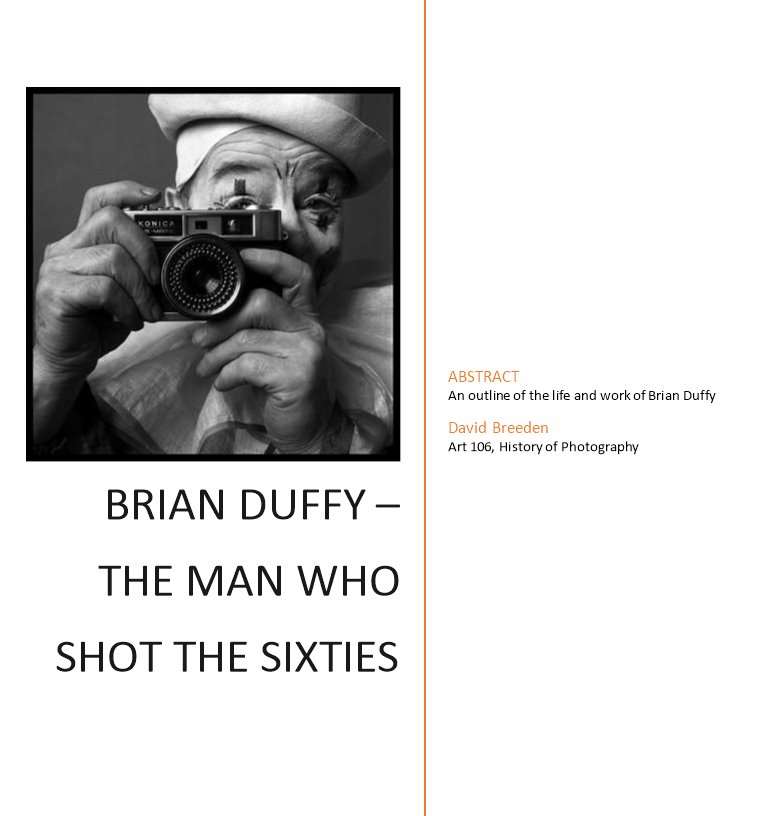 Brian Duffy was born in 1933 to Irish immigrant parents in London, England.Â  His household was highly politicized because his father was a republican and had done time as an IRA man.Â  His mother was from Dublin, Ireland which inevitably caused further friction in the household. Both of his parents were strict Catholics and Duffy was brought up in a typical working class family.Â  As a child, he was a self- confessed rogue, particularly when his father left to fight in World War II.Â  Free from parental control, Duffy and his friends roamed the streets of London, acting like little thugs and having a great time.Â  He remembers the American soldiers everywhere, their swearing, and the exciting magazines that they read.Â  He had little time for education.Â  However, in the first of the many unlikely events that color Duffy’s life, at the age of twelve he was enrolled at an early version of a progressive school in South Kensington run by the London County Council.Â  It was staffed by injured ex-servicemen and aimed to introduce problem children to the arts.Â  Duffy was taken to art galleries, the opera, the ballet, museums, and was immediately admitted.Â  A few years later in 1950, Duffy went for an interview at Central Saint Martin’s in the Fields to study painting.Â  He got in easily.

The surroundings into which he was thrown into was instantly appealing to him.Â  His fellow students had long hair, anarchic tendencies, intense politics, and a passion for art.Â  Although he did not know it at the time, it was a significant moment for British Art.Â  Duffy mixed with Frank Auerbach, Leon Kossof, Joe Tilson, and Len Deighton.Â  Deighton became a lifelong friend.Â  During his foundation year he also learned a healthy appreciation for what was called artspeak.Â  His new friends spoke an articulate language that in theory referenced art history, critical theory, and sought to legitimize what they did in their studios. While much of this was no doubt suspicious, it taught Duffy an important truth: sounding like an artist was half the battle in becoming one. This had a healthy impact on Duffy’s intellectual education as he sought to train himself as an intellectual.

It took many years for Duffy to discover that photography was going to be the best outlet for his newly found creative urges.Â  He spent the majority of his three years at Saint Martin’s studying fashion design which eventually gave him an edge as a fashion photographer.Â  After college Duffy went in and out of several jobs in the fashion business, including working for Princess Margaret’s designer, Victor Steibel, and producing fashion drawings for Harper’s Bazaar.Â  He learned the business and the process by meeting the right people.Â  He also began dabbling with photography.

Duffy went through early photographic apprenticeships with a variety of commercial operations.Â  He spent a short time with a photography company called Cosmopolitan Artists where he learned pretty much nothing from men there who didn’t know what they were doing themselves.Â  One of them was a young Ken Russell.Â  Duffy enjoyed more success at Artist Partners, an illustration firm, where he worked with Adrian Flowers to photograph products and scenarios for the company and then copy and turn into advertisements. Unlike Terence Donovan and David Bailey, Duffy was turned down for a job by the fashion photographer John French whose studio had become the major training ground for young photographers in London at the time.

With Duffy’s skill, ambition, and sheer nerve, by 1957 he had secured himself a contract with Vogue after engaging the interest of the magazine’s art director, John Parsons.Â  Charged at first with photographing everything and anything, Duffy found himself in the creative environment of Vogue Studios where he encountered some of the great photographers of the age.Â  He worked closely with models Jennifer Hocking, Pauline Stone, Joy Weston and Jean Shrimpton.Â  At this time, Duffy also began mixing regularly with David Bailey and Terence Donovan who were following similar career paths. In fact, it was he who introduced Bailey to Shrimpton, and they went on to become one of most famous celebrity couples of the 1960s.

Much has been written on the impact that the three young men had on Vogue.Â  Also with photography and London’s growing creative scene, particularly the work and lifestyle of David Bailey.Â  However, it was Duffy who in fact led the way. The three redefined the role of the photographer and became as well known as the actors, models, musicians, and members of royalty that they photographed.Â  They also played a major part in developing the 1960s fashion aesthetic, sexualizing the human body, and capturing through photography the wider concerns of their generation.Â  Duffy, Donovan, and Bailey were thought of as a unit of three renegade, working class photographers tearing up a corrupt industry with little regard for the rules of the old guard.Â  Norman Parkinson referred to them as “The Black Trinity,” while Cecil Beaton, in his 1973 book The Magic Image, remembered them as the “terrible three”.Â  Duffy himself said at the time, “Before 1960 a fashion photographer was tall, thin and camp. But we three are different: short, fat and heterosexual” (“Brian Duffy”).

Duffy eventually left photography because the lifestyle was making him unhealthy, but also because he began to dislike the highly commercial, cut throat advertising world that he inhabited.Â  His commercial work of the 1970s is of a high standard and is more distinctive than that of Donovan and Bailey, who found themselves following the fashion rather than dictating it.Â  One can detect that the once exciting world of photography had become routine for Duffy. Perhaps as a result of this, Duffy’s personal work from that period stands out in particular, and forms one of the most important and interesting bodies of work in his archive.Â  Rooted in the modernist aesthetics of Americans Paul Strand, Robert Frank and Walker Evans, Duffy experimented at length with finding the beauty in the intellectual process of photography. The pictures from this period are an investigation into the mysteries of photography, an attempt to shock the viewer into appreciating something that they would normally find boring. He was also trying to understand the impact of black and white, how taking color away from an everyday scene can add to it and give it additional resonance and power.Â  Most of all though, they are the polar opposite of the glossy, color photographs that his clients demanded.Â  By 1979, Duffy had had enough of photography altogether and made that fateful trip into his studio back yard.

Moving on to my impressions and opinions about his work.Â  I am not an expert in any way with photography and being able to see all of the intricate details associated with a photograph.Â  I do not have much experience taking photographs myself.Â  I will do my best as to give my best insights into his photographs.

The first photo of Duffy’s that I found was a photo of a man and woman in a car.Â  They appear to be a couple on a normal road anyone would be using.Â  The car is stationary.Â  The man is looking up in the air while the woman is holding what looks like a scarf over her head.Â  I cannot tell what kind of car it is that they are in.Â  When I first saw this photo I got the impression that the man is almost annoyed with her behavior.Â  To me he has a look on his face that this is something she does a lot. The photo is in black and white which I think adds to the uniqueness of his photos.

The next photo that I found of his that I like is a photo of a public area with a woman and man and a lot of pigeons.Â  I like this photo because it brings me back to a time when I was younger and able to travel through Europe with family.Â  I remember these public places in Europe having a lot of pigeons because people fed them.Â  This photo brings out some childhood memories for me.Â  It is another black and white photo.Â  I think that the woman in the white dress was staged there and she is posing.Â  I honestly think that the man in it was just a guy passing by and happened to be in the photo.Â  He just has that look about him, compared to her.

Following along, I especially like this next photo.Â  I like the symmetry of it with the woman posing is lined up with the building behind her.Â  In this photo I think that she is the only one posing for the photo.Â  Everyone else in it are just regular people who happened to be in the scene.Â  She seems to be expressing her openness to the situation and to life in general.Â  Her arms are open saying to open yourself up to things.

The next photo is finally a color picture by Duffy.Â  I do not know who the man is in the picture.Â  I like the effects done in this photo.Â  You can see a time lapse effect in this photo where you can see three different hands as the man in the photo was throwing sand.Â  This man seems to be in a desolate area.Â  All you can see is the sand in the background.Â  To me this photo is saying that you are not alone.Â  Even in this desolate area you can still run into another person.

The final photo of Duffy’s that I am going to discuss is a color photo with what appears to be an average woman.Â  She is holding up a newspaper that is covering some of her face.Â  She appears to be surprised by something in the newspaper.Â  To me this photo is saying that surprises can be found in any place in life.

To conclude, I was very interested in the life of Brian Duffy.Â  As someone who lived in England for five years I wanted to do a photographer from that country.Â  He lived an important life in the realm of photography.Â  To be called “the man who shot the sixties” you had to have had a major impact.Â  To be able to have that sort of impact for a whole decade is quite amazing. 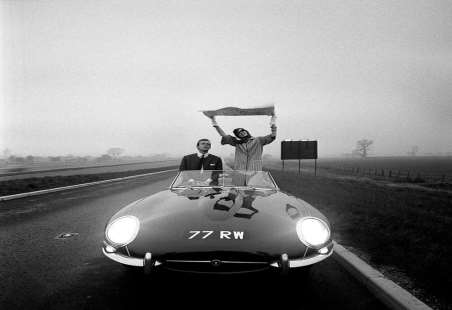 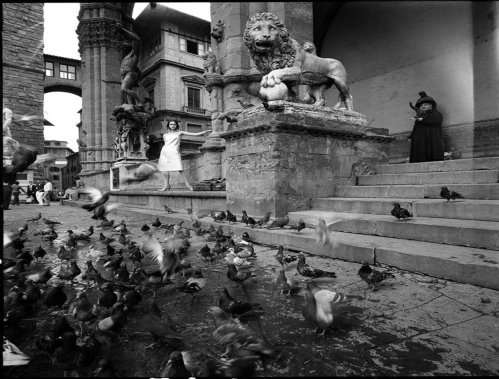 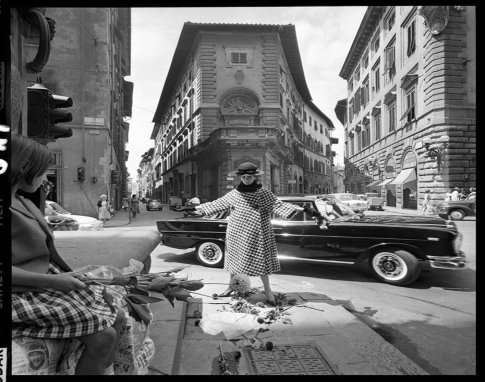 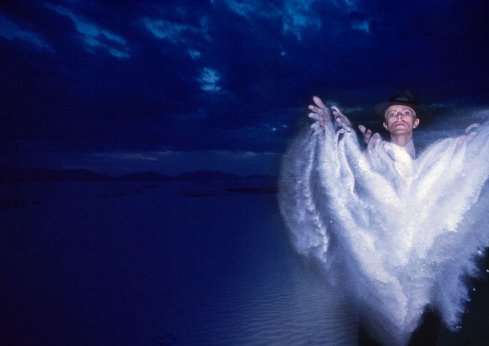 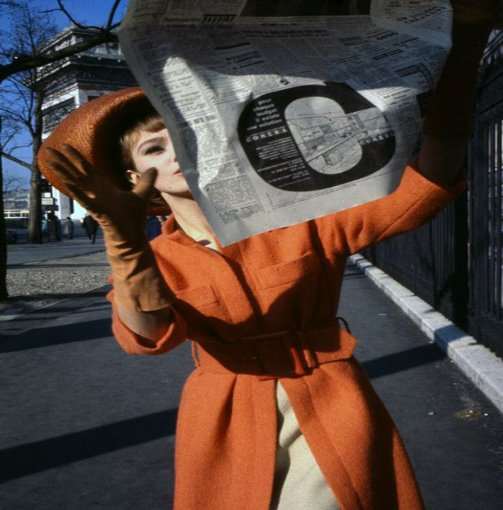