Let us recall the basic definitions of algebra

Constants and variables : A quantity having a fixed numerical value is called a constant whereas variables in algebra are letters such as x, y, z or any other letter that can be used to represent unknown numbers.

are all algebraic expressions

are variable terms as their values will change with the value of x, while (-4) is a constant term.

On the basis of the number of terms in an algebraic expression, they are classified as monomials, binomials, trinomials and polynomials.

Monomials are algebraic expressions having one term .

Polynomials are algebraic expressions having one or more than one term.

Remember – Only expressions with positive powers of variables are called polynomials. An expression of the type

is not a polynomial as

and the power of variable p is (- 1) which is not a whole number.

Classify the algebraic expressions as monomials, binomials or trinomials.

Addition and Subtraction of Algebraic Expressions.

To add or subtract algebraic expressions we can use the horizontal method or the column method.

All algebraic expressions are written in a horizontal line; the like terms are then grouped. The sum or difference of the numerical coefficients is then found.

In the column method, each expression is written in a separate row in such a way that like terms are arranged one below the other in a column. The sum or difference of the numerical coefficients is then found.

We know that the subtraction of two algebraic expressions or terms is addition of the additive inverse of the second term to the first term. Since the additive inverse of a term has opposite sign of the term, hence we can say that in subtraction of algebraic expressions change + to – and change – to + for the term to be subtracted and then add the two terms

What should be added to

The expression to be added will be 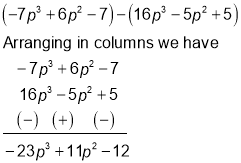 Multiplication of a monomial by another monomial

The product of two monomials is always a monomial.

Find the product of

The area of a rectangle is given by the product of length and breadth.

If we consider the length as l and breadth as b, then

Area of rectangle = l x b

Thus, it can be said that the area of a rectangle is product of two monomials.

Let us consider a rectangle of length 4p and breadth 3p,

Multiplication of a monomial by a binomial

To multiply a monomial by a binomial, we use the distributive law

The product of a monomial and a binomial is always a binomial.

Geometrical interpretation of product of a monomial and a binomial

Area of rectangle = l x b

Let us draw a rectangle ABCD with length (p+q) and breadth k.

Draw a line parallel to AD from the point P, PQâ«½AD meeting DC at Q.

Thus, the product k(p + q) represents the area of a rectangle with length as a binomial (p+q) and breadth as a monomial k.

Multiplication of a monomial by a polynomial

To multiply a monomial with a binomial, we can extend the distributive law further

Find the product of

We have multiplied horizontally in all the above examples

We can also multiply vertically as shown below

Geometrical interpretation of product of a monomial and a polynomial

Take points M and N on AB such that

.from the points M and N draw parallel to AD,

We have multiplied horizontally in all the above examples

We can also multiply vertically as shown below

We have multiplied horizontally in the above example, We can also multiply vertically as shown below

An identity is a special type of equation in which the LHS and the RHS are equal for all values of the variables.

The above equation is true for all possible values of a and b; so it is called an identity.

An identity is different from equation as an equation is not true for all values of variables,;it has a unique solution.

There are a number of identities which are used in mathematics to make calculations easy. We are going to study 4 basic identities

in this identity a and b can be positive or negative

Draw a square with length

as shown in the figure.

Let the area of original square be X

then, area of Square PQRS=(side)2 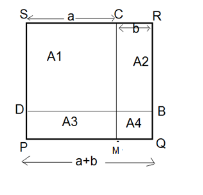 Mark a point M on PQ such that length of PM = a and length of MQ= b.

The whole square is divided into 2 squares and 2 rectangles say A1, A4,A2and A3 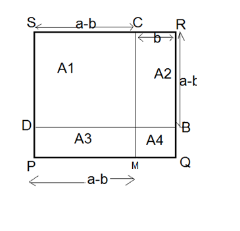 We draw a square with length a as shown in the figure.

Let the area of original square is A

Then, area of Square PQRS=(side)2

Mark a point M on PQ such that the length of PM = a-b and length of MQ= b.