1.Draw a line l and take a point O outside the line.O

2.Place any side of the set square forming the rightl

angle along the line l. 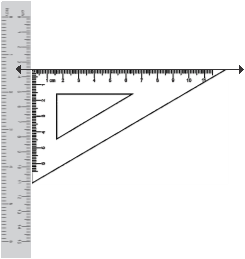 3.Place the ruler along the other side of the set square forming a right angle as shown. This ruler

is to be kept fixed.O 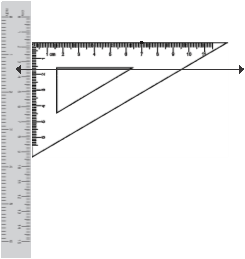 5.Remove the ruler and draw a line along the setOm

Remember only one line can be drawn through A which is parallel to l.

We have already studied parallel lines and their properties. We know that when 2 parallel lines are intersected by a transversal, the alternate angles so formed are equal. The above construction has been done using the same property.

When 2 parallel lines are intersected by a transversal, then the corresponding angles so formed are also equal. Using this property, construct a pair of parallel lines.

Example 1Draw a line l. Draw another line m parallel to l at a distance of 4 cm from it. 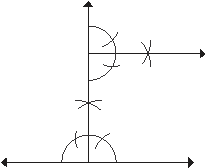 (since the sum of the interior angles on the same side of the transversal CG is 180°) Thus, m ï£¬ï£¬ l at a distance of 4 cm from l.

AB passing through the point P

a. by drawing alternate angles

b. by drawing corresponding angles.

2. Draw a line AB. Draw a line CD perpendicular to line AB. Now on CD mark a point P at a distance of 4.5 cm from C. At the point P draw a line parallel to given line AB.

5. Draw a line XY= 8 cm. On the line XY mark a point A, 3 cm from X. At the point A draw a perpendicular AB to the line XY. Mark a point M on AB at a distance of 4 cm from A. draw a line CD parallel to XY passing through M.

A triangle is a three sided closed figure. It has 6 elements -3 sides and

For triangle ABC given alongside, sides are AB, BC, and CA and the angles are ∠ABC, ∠BCA and ∠CBA

However to construct a triangle uniquely, we do not need the measure

of all six parts. A triangle can be drawn with a definite given size if any BC

of the 3 conditions given below are fulfilled.

ÂŠ The three sides of the triangle are given – SSS criterion

Remember: A triangle cannot be constructed if

Before we construct triangles we should make a rough sketch showing all the given measures.

Construction of triangles when 3 sides are given.

A triangle can be drawn only when the sum of any two sides is greater than the third side.

When three sides of a triangle are given, check whether the sum of any two sides is greater than the third side.

If yes, only then the construction is possible.

Example 1Which of the following can be the sides of a triangle?

a.Add the sides by taking two at a time

However 11+12 < 24, hence these measures cannot be the sides of a triangle b.Add the sides by taking two at a time

Since the sum of any two sides is greater than the third side hence these measures can be the measures of a triangle.

To construct a triangle when the side is not the included side in the given angles, we will first the third angle using the angle sum property and then consider the given side and the two angles that include that side to construct the triangle using ASA construction criterion.

The given side QR is not the included side between the given angles ∠P and ∠ Q.

Now we can use the ASA construction criterion to construct triangle PQR with ∠Q =30°, ∠R = 40° and

To construct a right triangle when the hypotenuse and one side are given.RHS construction

This construction is only for right angled triangles when the hypotenuse and one side are given. One angle is

Since it is a right triangle right angled at X

Remember in a right triangle, the hypotenuse is the longest side.

2. Which of the following measures will form a triangle? Why or why not?

2. Construct a triangle ABC with each side measuring 6 cm. Measure the three angles of the triangle so formed. 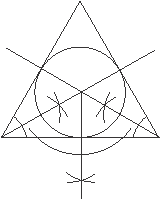 1.Draw the angle bisectors of ∠P and ∠Q. let these intersect each otherR

at the point O.

2. From the point O draw a perpendicular to any side of the triangle. Name the point where it meets the side as M.

3. With O as the centre and radius OM draw a circle.O Does the circle touch all the sides of the triangle?

Such a circle is called an inscribed circle and the centre is known as the incentre.PMQ

Can you draw another circle larger than this which can fit into the triangle? No the inscribed circle is the largest circle that will fit inside the triangle.

Method: Each student will work individually to create a drawing of his/her initials using the parallel, perpendicular, and segment bisector constructions

1.Make a sketch of your initials and identify where each construction will be used.

It is necessary to use at least one

Š perpendicular line through a point on a line,

Š perpendicular line through a point not on a line,

Š parallel line through a point not on the line, other constructions what you have learned can

2.Construct using a compass and a ruler.

3.Colour the alphabets and make them as creative as you can.

Hint: constructions will be easy if you use the straight lined alphabets as

1.Fill in the blanks

a.The sum of angles of a triangle is . b.A triangle has elements.

c.If 2 angles and the side are given, a triangle can be constructed.

e.To construct a triangle with given sides, the sum of 2 sides should be than the third side.

2.Which of the following can be the sides of a triangle?

3.Construct a triangle ABC with the following measurements:

4.Draw a line parallel to a given line at a distance of 7.5 cm from it.

5.How many lines parallel to a given line can be drawn through a point outside the line? Why?

4.Construct an equilateral triangle LMN with each side measuring 6 cm.