The following study will analyse and compare the contemporary photographers- widely known for their conceptual portraits- American Cindy Sherman (b. 1954) and Senegalese Omar Victor Diop (b. 1980). The works selected are Albert Badin by Diop and Untitled (Self-Portrait with Sundress), both of which feature a persona explored through self-portraiture and conceptual portraiture. Thus, the works go in hand with my theme of identity. 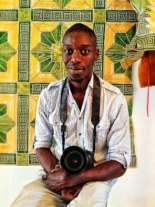 Cindy Sherman studied visual arts at university, focusing firstly on painting before later working with photography, which is now her most prominent medium. Sherman is one of the most respected photographers of the late twentieth century. The majority of her photographs are self-portraits, each featuring a feminist element which challenge the representation of women in society and media, as well as American popular culture. Hence, her works are a vehicle for commentary on contemporary American society.
Omar Victor Diop studied at the Business School of Paris and worked in communications before concentrating solely on photography. His most famous series is Diaspora (2014) featuring staged self-portraits inspired by Spanish portraiture of the 14th and 15th century. It explores the identity of modern Africans and the role of African history, culture and heritage in the formation of such. Thus, his works explore the interconnectedness of collective and personal identity.
Note: Diop’s name is both correctly spelt as Omar Victor Diop and Omar Viktor Diop. In this study, the former will be used. 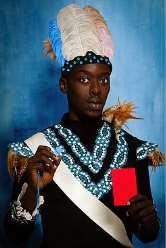 Diop’s series Diaspora– meaning the dispersion of people from their original homeland-was first exhibited in 2014. The series appropriates Spanish portraiture of prominent African figures who experienced African diaspora in the 14th and 15th century, with Diop as the subject.Â  Diop produced this series while residing in Spain, during which he experienced cultural alienation. In recreating portraits of famous Africans who were alienated in the most extreme sense in Europe- experiencing racism, mocking, and complete abandonment from society- Diop conducts a personal search for both his own identity and the collective identity of Africans in Europe. 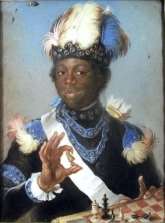 Sherman
Annotations
Caricature of stereotype: In this work, Sherman takes on the role of a middle-class woman, which is indicated by her tacky jewellery and costume, on vacation, shown by her intense sun-tan. Thus, Sherman handles a multitude of stereotypes in the work: Americans, women, and the working-class. 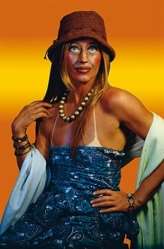 Analysis of formal qualities
The work analysed is Untitled (Self-Portrait with Sundress), however, while researching, it was found that sources have also titled the piece Untitled (Self-Portrait with Spraytan). In this study, the former will be used according to the auction site artnet.com, which was deemed a reliable source. The piece was created in 2003 and is a chromogenic print on smooth white paper with full margins, and 66 * 40 cm.
The work is a part of Sherman’s early 2000s series of self-portraits, which feature Sherman in different costumes and poses, portraying female stereotypes in American film, television, and advertising. Through the medium of photography, Sherman mimics reality and constructs new identity: a persona. In doing so, Sherman criticisesthe subject and role she takes on. In the case of Untitled (Self-Portrait with Spray Tan), Sherman critiques American society for its superficiality and consumerism as well as banality.
As with most of Sherman’s work, it is a self-portrait, in which Sherman uses makeup, costume, and props to depict a common American stereotype and visually and socially-defined personality type. Sherman is barely recognisable and easily changeable as she depicts an intensely tanned subject in a sundress. The subject is posed in an unnatural manner, and her features are exaggerated, thus creating a caricature.
In terms of visual properties, Sherman
Quotes
“I feel I’m anonymous in my work. When I look at the pictures, I never see myself; they aren’t self-portraits. Sometimes I disappear.” – via artlyst
Interpretation of function and purpose
The work forces the viewer to confront and reconsider stereotypes through. Sherman does not define where she stand in relation to he works, and the interpretation is left open to the viewer. Ultimately, the reaction of the public to her work says more about the viewer than the subjects themselves.
In another sense, Sherman argues that personal identity is comprised solely of social dictates and personal intention in that she constructs a persona entirely of vison and socially defined personality archetypes. more
Protagonist can escape role, identity construct, fluid, persona – Sherman does not fix herself in single social position (quote)
Evaluation of cultural significance
Sherman has played a major role in various art movements, each of which are reflected in the piece.
Feminist movement: Emerging in the late 1960s, the movement sought to criticise and change the world through art, with a specific focus on women and their roles in society over a longer period of time, being the nineteenth to twenty-first century. Sherman, as other feminist artists, include the female perspective in their works and question the social landscape of their context. She explores femininity as a social construct and examines female typologies. In Untitled (Self-Portrait with Sundress), Sherman takes on the role of the stereotype of a sun-tanned, middle-class American woman on vacation, with a so-called ‘cheap’ appearance. Through creating this character, Sherman explores the role of appearance in the formation of identity, particularly female identity. Thus, Sherman reworks archetypes as both a creator- and woman- and character. She re-establishes women and what it means to be a woman in today’s world, and freezes herself in the role she takes through the medium of photography. Thus, the works are both deeply personal and feminist.
The Pictures Generation: This label often refers to both contemporary artists and specifically visual artists active in the seventies and eighties. Critically, the artists use appropriation and montage, as well as explore the constructed nature of images through the medium of photography. As with Sherman’s work, members of this movement often seek to trigger social criticism in viewers saturated by mass media. Indeed, the artists themselves were heavily influenced by the saturated image culture of the United States, and thus, the works challenge traditional art forms and mimic the artificiality of media and in particular advertising. Works appear mass-produced and blur between fine art and popular images, as they are composed with conceptualframeworks. Sherman specifically explores the boundaries between original and fabricated reality through an exaggerated appearance with a clearly staged environment and printed the photographs in large-scale and bright colours, yet the works are clearly inspired by reality. This creates a blend of performance and photography itself.

Diop & Sherman
Making comparisons and connections
Formal qualities: Whilst both works share the medium of photography and are self-portraits, the subjects portrayed are vastly different. Both Sherman and Diop take on personas which differ greatly: Sherman poses as an American sun-tanned woman, Diop is a historical figure.
In terms of visual properties, the photographs
Position, composition
Both artists appropriate to some extent. Diop directly mimics a historical portrait, whereas Sherman imitates a specific archetype. The subject is easily recognisable, and thus leads the viewer to question the role of appearances in the formation of identity, and how appearances can or cannot be misleading: does the fact that the artists dress up as a figure mean they are the figure? As the works are self-portraits and the subject is the artist themselves, there is undoubtedly a strong personal link to each work for the artist.
Furthermore, both works have a strong element of artificiality. The photographs are staged and feature the subject in exaggerated costume and makeup, and are not designed to be an accurate reflection of reality. However, Sherman deliberately creates a caricature of the subject, whereas Diop recreates a historical portrait with added football props, carrying a symbolic meaning.
Function and purpose: Critically, Diop explores the paradox of modern and historical identity, as well as the role of history in the formation of contemporary African identity. Through posing himself as Albert Badin and the use of football symbolism, Diop’s work investigates the link between our culture, the history of our homeland, collective and personal identity of Africans. Contrarily, Sherman’s work does not have a focus on history, and instead focuses solely on modern American society and how this influences the personal identity of women. 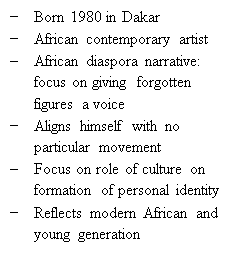 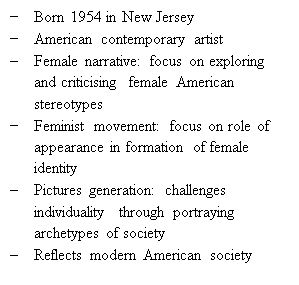